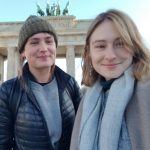 That’s why I have gradually learnt and tested more Korean vegan phrases and I now want to share them with the rest of the vegan world! Plus, Vegan Sisters have teamed up with the wonderful Johanna Vargas to provide you with some beautifully clear illustrations. (I will be adding more Korean phrases over time, so not all of them will have illustrations!)

Scroll down to check out the vegan Korean phrases!

We have vegan phrases in lots of other languages as well!

How to go Vegan: 7 Easy Steps to Ease Your Transition

Vegan Eateries in Ubud, Bali: The Pledge of One Foodie to Another

Any questions for the Vegan Sisters?
Holler Box

You can toggle right click protection within Theme Options and customize this message as well.

You can also add shortcodes here.